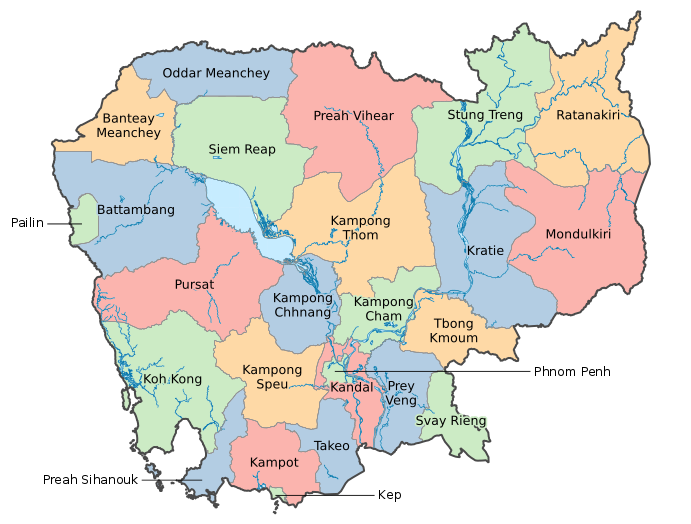 Cambodia has 25 provinces (khaet). Phnom Penh is the country’s capital, and it is classified as an autonomous municipality and is governed as a province.

Further, provinces are segregated into districts named Khan. The districts for each province differ from one place to another with some only having two districts while bigger provinces have up to 14 districts. Further divisions of provinces are khum or sangkat.

There is not much information that can be found about prehistoric Cambodia. The start of the Khmer Empire begun in 802 AD when Jayavarman II declared himself as the king. His first order of business was to unite the Chenla Khmer princes. The Khmer Empire thrived for more than 600 years, accumulating massive wealth and expanding its influence in the Southeast Asia region. It also aggressively spread Hinduism and Buddhism and built more than 1,000 temples. Of these temples, the Angkor Wat, awarded as a World heritage Site, is the most popular.

The reign of the Khmer Empire ended in the 15th century when Ayutthaya waged a rebellion. With its decline in power, Cambodia eventually turned into a protectorate of France in the year 1863. It gained its independence again in 1953. In 1965, the Vietnam War reached Cambodia which resulted to the US bombing from 1969 to 1973. In 1970, the Khmer Republic was installed. This saw the emergence of the Khmer Rouge power, taking over the capital Phnom Penh. From 1975 to 1979, the Khmer Rouge carried out genocide, but they were eventually defeated by Vietnam with backing from the People’s Republic of Kampuchea and the Soviet Union.

For a time, Cambodia was controlled by a United Nations mission. It wasn’t until 1993 when the UN oversaw an election. This reinstated King Norodom Sihanouk and birthed a new constitution for the country.

On November 30, 1998, The Royal Government of Cambodia outlined a political platform that aims to develop and rehabilitate all sectors of the country, putting on top priority democracy, political stability, peace, economic, poverty alleviation, and economic development.